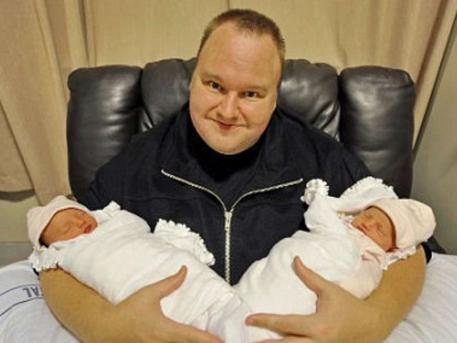 Dotcom says FBI have seized it all

The no internet rule was one of Kim Dotcom’s bail conditions.

It became the most online part of the country after internet tycoon Kim Dotcom paid for an ultra-fast broadband cable into the community where he lives.

Now, it is an internet deadzone.

Yesterday, the Herald on Sunday followed the rules for all visitors to the home where Dotcom has been bailed to wait on an extradition hearing.

All cellphones, laptops and smartphones must be left at a perimeter before you’re able to enter the property. Closer, at the family home, all entrances carry the sign: „No smartphones and internet devices.“

The ban on internet access was among bail conditions placed on Dotcom when he was freed on Wednesday. He spent a month in jail after a US-requested arrest on charges of criminal copyright violation.

After six nights at home, Dotcom will return to court this week to face US attempts to have him returned to prison.

Last night, he was enjoying time with wife Mona and their three children – Kimmo, Kaylo and Kobi – at their home in Coatesville. The notice of appeal was frustrating news, Dotcom said. He had hoped receiving bail would give his wife confidence he would be home when she gives birth to twins next month.

When the case goes back to court, the issue is likely to be the same.

The US case for keeping Dotcom in jail has turned on whether he is a flight risk – and whether he has the money to flee.

The January 20 raid on Dotcom and his Megaupload business has frozen hundreds of millions of dollars in funds.

It is uncertain, Kiwi taxpayer-funded lawyer Anne Toohey has said, that all his assets have been seized.

The Herald on Sunday was the only media present for the courtroom argument between Toohey and Dotcom’s lawyer Paul Davison QC.

Judge Nevin Dawson told Toohey that Dotcom was being asked to „prove a negative“ which seemed „unfair“. „If there is no evidence, surely there is no proof and surely the benefit of the doubt must be exercised in favour of Mr Dotcom.“

In the hearing, Dotcom said there was no money remaining which had not been seized and he could not even afford to pay legal fees to fight the case.

„The FBI have seized all my assets. They have traced every financial transaction since 2010. There is absolutely nothing that hasn’t been found.“

via Dotcom says FBI have seized it all – National – NZ Herald News.